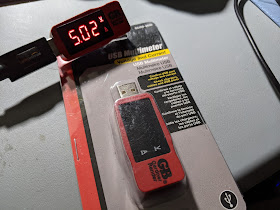 A fair number of computers people nowadays would refer to as vintage have USB either as an option or built-in, and USB ports crap out like everything else. Accordingly there are testers: at Big Box Hardware Store the other day while I was buying paint, they had one on clearance for just $3 each. That was worth picking up a couple to mess with.

Whoever wrote the package copy was either a slick advertiser or a liar, but I repeat myself. Among other things it bills itself as a "USB multimeter." This is barely technically true since it does measure both DC voltage and amperage, but is definitely not what you'd consider a typical multimeter. It also says on the back that it's "USB 3.0-3.1 Type A" yet it lacks the blue tongue and extra pins of a true Type A USB 3.x connector.

Still, it's cheap, and it will correctly tell you the voltage off the port (as tested with one of my real multimeters). This isn't enough to tell you if the whole shebang including data lines and signaling is working but it seems unlikely you'd have voltage but nothing else, assuming no monkey business like a "condom" was installed. If that's all you want, plus some reassurance the voltage you're getting is nominal, then this is $3 well spent.

However, what it doesn't accurately tell you, and apparently none of the similar small devices of this type will, is the available current. You'll be able to estimate the current draw by plugging something in the other end, but you won't be able to use it to tell if you're connected to a 1 amp or 2.1 amp port. There are USB testers that will put an adjustable constant load of however many amps on the line, and you can determine the available current by how high you can go before the lines sag, but while basic ones aren't exorbitant they certainly cost more than this one did.

You may be able to infer that a device is drawing more power than is available, but you'll need a powered hub to compare. For example, attaching my INOGENI VGA2USB3 showed exactly 60mA draw and a voltage of 4.99V as connected directly to this Raptor Talos II (and doesn't work). Connected to a powered USB 3.0 hub, however, it reads 5.14V and 550mA (and works). You wouldn't have any idea it's not enough without seeing how it performs connected to something else, and you can't assume the port only offers 60mA because the device may simply not draw anything when it fails to initialize. Likewise, the voltage difference probably isn't salient because the USB spec allows up to 5% variance under load, meaning even a voltage of 4.75V wouldn't necessarily be "sagging" per se.

Cheap USB testers like this aren't utterly useless but they're really more useful for confirming normal function rather than troubleshooting. If you get low voltage you'd still need to test the computer's power supply as well, and you can only correctly estimate a device's current demand if it's actually functioning and drawing power. You can't also conclude anything about the port's performance under a consistent load since it doesn't generate one. I don't think I wasted my money but you probably don't want to spend any more than that for such a limited device either.