One of the more unusual 68000-based systems -- even a few powered by ColdFire CPUs -- are the Alpha Micros. They run a DEC-inspired multiuser operating system called AMOS and popped up in lots of vertical markets as diverse as point of sale, veterinary and medical, and even churches (I encountered my first Alpha Micro in a Salvation Army corps, where it ran the business end using its terminal-based office suite and customized menus). I have a particular fondness for these systems due to a story that I'm not quite sure I'm past the statute of limitations on, but suffice it to say I find them to be entertaining oddballs and I serve my own homage site actually on an Alpha Micro, the Eagle 300. Here it is with its rather nice AM-75 colour terminal (a modified Wyse WY-370) and an AM-401 external CD-ROM (a rebadged Toshiba XM-5401B). 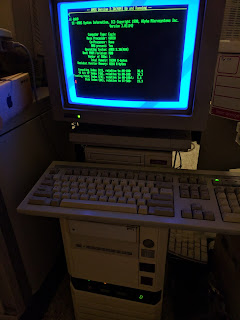 This machine does 24/7 non-stop service and it occurred to me one day walking past my house's server room that there was a rather loud whine coming from it, as if a cooling fan was stripping its bearings or something. A little investigation determined that it was coming from the E300, but it wasn't the power supply fan or the single 80mm case fan: it was the hard drive, which was slowly cooking itself to death because both of those fans, the only case ventilation, had failed. The power supply was a cheapo AT (not ATX) power supply I bought off the shelf a few years ago, but the case fan looked like the original one that came with the unit when it was manufactured in the mid 1990s. It's time for a Refurb Weekend!

The first order of business is to solve the cooling problem temporarily and order new parts. Let's just take the case off so the system can run as cool as possible until supplies arrive. 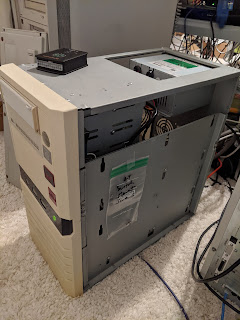 Replacing the PSU fan isn't prudent in this situation because there's probably other marginal parts in it as well; at this point it's safer just to replace the whole thing. Although I could jam another AT supply in it, they're getting rarer than ATX PSUs, the currently available stock are usually of poorer quality, and AT supplies have the singularly inconvenient attribute of having an integrated hard power switch that you have to weasel into where the old one went. (Notice the bag of mounting parts from the last time.) 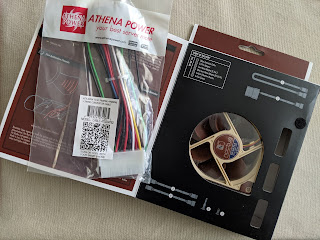 For the new fan I picked a high-flow Noctua NF-A8 fan (the single-RPM FLX version, since this machine is too old to have PWM control) because the concept of a high-end fan in an old school workhorse amuses me conceptually. However, for the power supply I got an off-the-shelf ATX PSU and an AT-to-ATX converter. 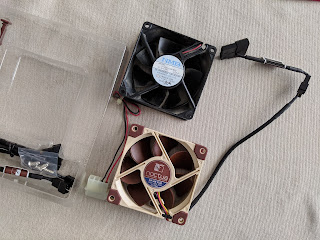 The fan was the easy part: the old fan has a Molex power connector, and the Noctua conveniently includes a converter for that in the box, so done and done. 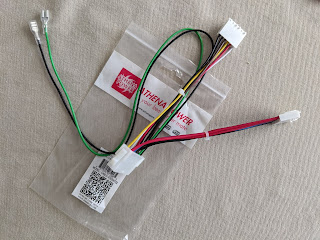 The AT-to-ATX converter is a little more complicated. This takes an ATX power connector and has leads to the existing switch instead of providing one of its own, and provides power on traditional AT P8/P9 connectors. You slip its switch leads out and connect the ATX connector to the PSU, and then connect the P8/P9 connectors to the motherboard. 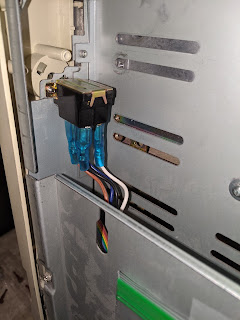 The advantage here is that once wired in, you don't have to deal with the motherboard power supply connectors anymore or the power switch; you just switch out the ATX side like any recent system. This is important because many later AT supplies (and, it appears, this cable) don't properly key the P8 and P9 connectors. Inserting them backwards is guaranteed to let out the magic smoke and a lot of cussing, so remember the old nerd saying that you should never have red and red together. With this cable you just get it right once and you don't have to risk stressing the connectors or shorting out the machine next time. 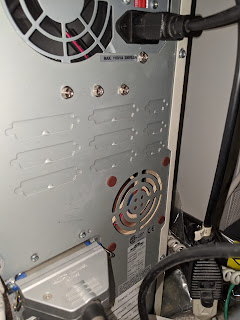 With the rubber mounts in, the Noctua pulls a prodigious amount of air through, and combined with the now properly functioning power supply our Refurb Weekend was completed in less than a Refurb Hour. Best of all the hard disk is no longer shrieking from heatstroke. Still, maybe a SCSI2SD is the next project for this machine.

Posted by ClassicHasClass at 10:51 PM