AppleShare PC on MS-DOS and the Apple LocalTalk PC Card

One of the machines in my office is a non-descript Am5x86/133 (486 class, infamously claimed by AMD to be "Pentium 75 equivalent") in a generic tower case that exists purely to play MS-DOS games I like and run a few DOS-only applications. Its name is Alex, after Alex St. John, who was the evangelist for DirectX during his tenure at Microsoft (despite the fact this machine does not have any version of Windows on it).

Being a late 486-era system it has an ISA motherboard with a couple VESA Local Bus slots and not a scrap of PCI. Most of us of a certain age will remember how rickety lots of cards in a VLB/ISA system could be, though fortunately the (ISA) Sound Blaster ViBRA 16X and (VLB) S3 86C805-P cards work, so games work and that's what it's largely here for anyway. In fact, some games only work on this system that won't work with my AT&T Pentium 75. One thing I have never gotten working on it, however, is networking. I've tried several ISA network cards, even a Xircom parallel port adaptor, and nothing will talk to anything else on the network -- with the exception of AppleTalk using Apple's own ISA LocalTalk card. 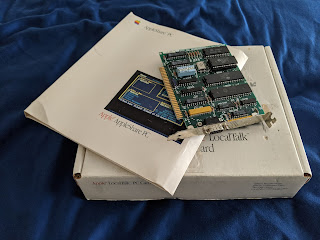 The Apple LocalTalk ISA card was actually a fairly early release, appearing in 1987 just two years after LocalTalk debuted to allow Macintoshes to connect to the new LaserWriter printer, an integral part of the benighted Macintosh Office initiative. The fact that AppleShare for the Mac appeared the same year is notable, since PC support for LocalTalk networks must clearly not have been an afterthought at Apple. Although a company called Tangent Technologies was apparently first to the punch in 1985, it doesn't look their PC MacBridge product sold in any large numbers, and I've never seen one myself. 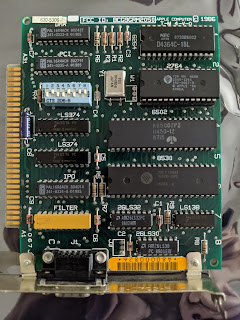 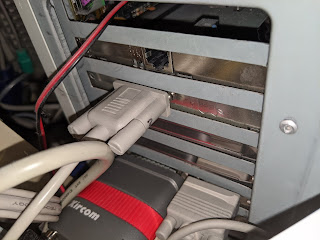 Here it is installed in the back of Alex. You'll note it does not have the more typical Mac 8-pin mini-DIN connector and instead has a more PC-like DE-9 serial port. That's actually because Macs of that generation didn't have mini-DINs either, so you had to get the Apple LocalTalk Locking Connector Kit DB-9 [sic] package, sold separately of course, to hook it all up. However, I have a Farallon PhoneNET connector plugged in here instead which they manufactured with a DE-9 port as well, and I then use a Dayna EtherPrint-T to bridge the LocalTalk segment to wired Ethernet. The EtherPrint-T doesn't do MacIP (that is, IP over LocalTalk) but it does do LocalTalk to EtherTalk bridging pretty much seamlessly and was less mucking around than with a GatorBox, so that's what we've got.

The software side was provided as a DOS Terminate and Stay Resident (TSR) program, sold as AppleShare PC. I have both AppleShare PC 2.0 (1987) and 2.0.1 "2.01" (1989), but unless you have very old machines on your network you really want 2.0.1 for proper support of AppleTalk Phase 2. Interestingly, the earlier version was on 3.5" floppies, but the later version I have is on 5.25". The TSR provides a "desk accessory" triggered by a hotkey combination (by default Ctrl-Alt-Esc) that pops up and lets you log on, mount and unmount network shares as DOS drive letters. Since I have two hard disks and a CD-ROM as C: through E:, the AppleShare volume invariably appears as F:.

Let's see how this works. I took these pictures transferring across yet another vain attempt to get the NIC working for useful purposes (it failed, of course, because this machine hates me). Rather than do screen captures I've chosen just to photograph it with my phone to give you the full 1990s PC CRT monitor experience. 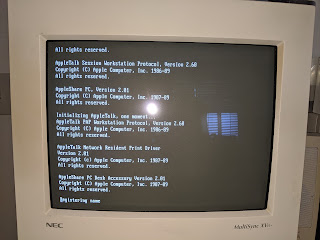 Booting up. All the little submodules consume rather a lot of conventional memory to the point where many games won't run, so one of the first things I did after installing the software was set up a boot menu (it runs MS-DOS 6.22) with separate profiles for games and the LocalTalk card. With the 2.01 software loaded, and the sound and CD-ROM drivers, I have just 432K of conventional memory free despite loading 66K of everything else into the UMB. (I don't miss DOS memory management at all.) 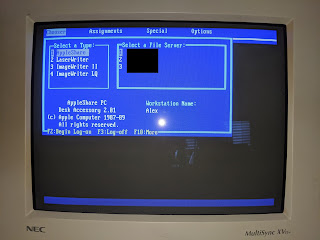 The desk accessory immediately starts after load to let you mount a volume. Here I will mount Jonathan, my Power Mac 7300 with a Sonnet G4/800 running Mac OS 9.1. You don't need to know the other servers, spank you very much, but the software seems only to "like" "real" Macs: it will not log on properly to thule, my NetBSD Macintosh IIci running netatalk, despite it being a "real" Mac, and it obviously doesn't know how to do AFP-over-TCP so you're limited to hosts running Jaguar (10.2.8) and prior. 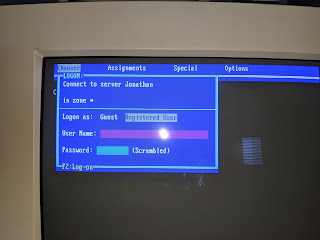 Logging on. Using function keys to proceed is not really intuitive. One wonders if Apple did that on purpose. 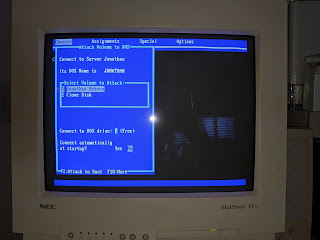 Jonathan has two drives, each an individual volume (HFS+ volumes work fine), so we will pick the main drive and mount it as F:. As a convenience you can automount drives on boot, just like a Mac could. 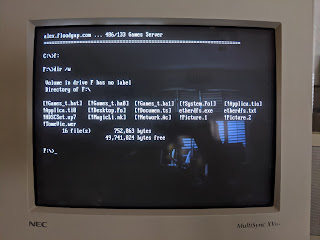 And here are the contents of the newly mounted network share. Files and folders that have a resource fork have an exclamation point prepended as a visual warning they are not PC files, and there are no LFNs (please, it's 1989), so filenames just spill into the extension (!System.Fol for System Folder). If names clash, a digit is used (!Games_t.hat versus !Games_t.ha0, using underscores to replace spaces within the filename and extension fields). Just two files show up without a "!", which are the ones I earlier FTPed over to the Power Mac 7300 and have only a data fork. 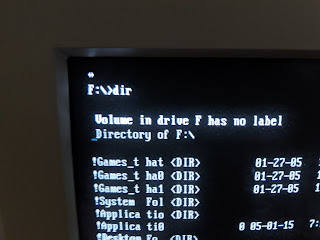 While network transfers are in progress, a little set of arrows appears at the upper left, almost sorta kinda like a Mac would do. 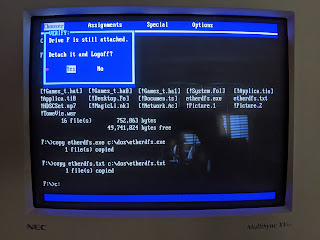 Files are copied (regular old DOS COPY), so let's log off. It still doesn't work, of course, and I'm pretty sure I have the right packet driver and everything else. I'm going to have to take this machine apart down to the slots to figure out why. Anyway! 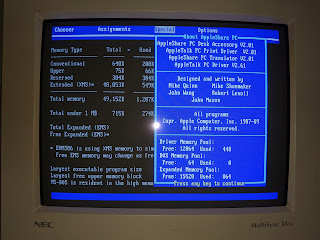 AppleShare PC 2.01's "About" box, just for completeness. Interestingly, the PC driver is given as version 2.61, but everything else is 2.01. I don't know anything about the authors. Do you?

There are some odd things about this card but it could again just be something wacky about this system. One of the oddest is that the packet driver I tried to set up for the SMC EZ 1660 NIC it has in it now actually knocks the LocalTalk ISA card completely off line, as in it won't respond to commands anymore until I power down the system, let it sit a bit, and bring it back up.

LocalTalk was gradually displaced by EtherTalk as Ethernet became more commonplace, and the PC ISA card was relatively expensive and limited to environments where Macs and PCs co-existed, so Apple never observed strong sales and discontinued the package with the rest of their LocalTalk offerings around 1991. There were a surprising number of third-party versions, though. After Apple quit LocalTalk entirely and handed the market over to Farallon, Farallon produced their own version of the card, allegedly strongly based on Apple's, until 1993 or so and integrated the software into the Windows 3.x versions of Timbuktu. It was still DOS-based, however, and the two halves I'm told never fit together well; issues with Windows 95 seem to have limited its further evolution. Daystar reportedly bought out Tangent and produced additional cards branded as the Daystar LocalTalk PC Card, but I've never seen one of those either. Dayna and Centram Systems also apparently made their own versions too; a company called COPS bought out Dayna's and Daystar's products and continued to produce them for several more years. Some of these cards had proper DOS ODI and NDIS drivers, so it was eminently possible to use those under Windows 95 or 98 with Miramar MacLAN or Thursby TSSTalk. NT 4.x drivers also apparently existed for the Daystar card(s). Miramar MacLAN is particularly handy as it allowed peer-to-peer networking with other AppleTalk clients without needing Windows NT.

Other than ISA cards, there were parallel port ones, but these were apparently crummy. One company even made a prototype PCMCIA LocalTalk adapter but it was never released.

Besides regular EtherTalk, some DOS Internet suites provided packet drivers for the LocalTalk card, the analogous equivalent to MacIP on a "real" Mac. However, you need to set up a AppleTalk IP router for this, so I haven't tried this functionality and it would be just as slow as MacIP would be otherwise. Still, I guess it beats no networking at all. Overall the card is an interesting device, it worked out of the box and it's still working reliably years later, so if I end up only being able to transfer files this way there are worse first world problems to have.

Posted by ClassicHasClass at 11:22 PM