Happy holidays and to those of you that celebrate it a very merry Christmas. As a holiday-appropriate entry, let's unbox ... a Commodore SX-64!

The Commodore SX-64 has the distinction of being the first portable colour computer. Originally part of an entire family of portable Commodore 64 systems, it was supposed to be the midrange model between the black-and-white SX-100 and the dual drive DX-64 as announced at Winter CES 1983, but only the SX-64 was ultimately released by May of that year. (There was even an SX-500, based on the Amiga 500, but it never got past the prototype stage.) Portable in this case is used advisedly, as it weighs about 23 pounds, but it has a 5" monitor which isn't terrible, a built-in 1541 5.25" floppy drive and a detachable keyboard all in one tank-like enclosure that can be lifted around by the handle (which doubles as a stand). Power usage is too much to run on an external power source any smaller than your typical car battery but in the age of systems like the Osbourne 1 such a machine wasn't implausible as a luggable. It did not sell particularly well but the sheer number of SX-64s that survive and see regular use today (I actually own three others) attests to their residual popularity. I acquired this SX-64 as NOS still in its original box and packaging a few months ago and decided to get it out of storage as a fun little exploration.

Getting it out, we experience our first Christmas emotion: anticipation. This box was only opened by the previous owner to check the contents, though it got flattened a bit by sitting stacked in the storage unit. 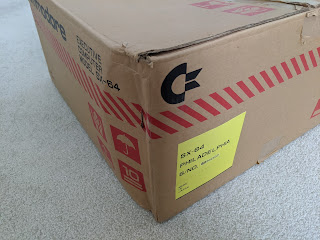 Obviously Commodore didn't lose a lot of sleep making the box pretty (not like the regular C64 or other packages); it's plain jane cardboard in the same look as their printer boxes and certain other sub-sexy accessories. The indication "PHILADELPHIA" on the label suggests this was stocked at their West Chester, PA headquarters. Although it's likely some stores did sell the SX-64 at retail, at least as a kid in Southern California I didn't see any retail sales at the usual suspects of the day, including where we bought our 64 and 128 and peripherals (Target, Sears, Toys R Us, etc.). We will verify the serial number shortly. 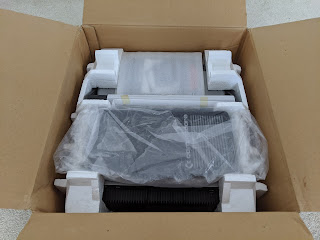 And now the second Christmas emotion — delight — as we see the SX-64 inside. On top is (in protective foam wrapping) the manual, and (in protective plastic) the "saddlebag" accessory that is very precious to SX-64 owners that is often separated from used units. I have put the manual aside. Let's get the saddlebag out of the plastic. 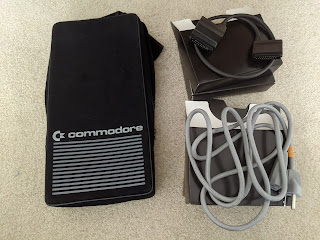 The "commodore" and logo are silk-screened onto the fake fuzzy exterior, which on my other units is worn or faded, but not so here on this absolutely pristine one. Inside the saddlebag are two boxes of the type 5.25" floppies used to come in. One contains a totally ordinary grey IEC power cord but the other contains a beautiful new DB-25 keyboard connector cable. (A straight-thru DB-25, suitably machined to fit, will do if your SX-64 doesn't have one.) 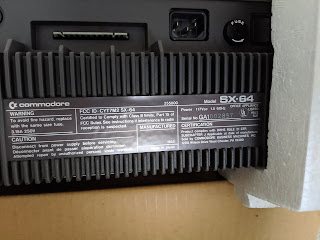 Serial number checks out. This unit has a manufacture date of September 1983 and was "made in Japan." SX-64s have the full complement of ports except for cassette; the SX-64 Kernal ROM instead defaults to device 8 (the internal disk drive), but has a bug that overruns the input buffer when using the SHIFT-RUN/STOP shortcut to load from disk. The Kernal also uses different, higher-contrast colours. You can connect an SX-64 to an external monitor, but do it when the power is off or you can kill the SID (I've actually done that once, to my great chagrin).

The other major glitch with the SX-64 was the top-loading expansion port. Its ribbon cable to the mainboard was so inadequately shielded that devices like REUs would not work reliably, forcing Commodore to issue a service pack to correct the problem. 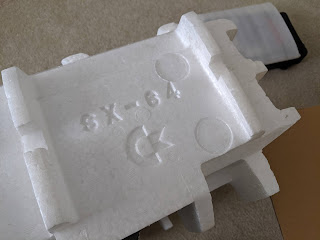 Each side of the main unit's Styrofoam packing has "SX-64" and a Commodore logo stamped on it. 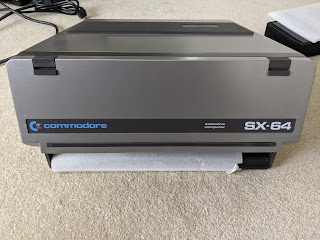 Portrait with the foam sheet protection still on the handle. 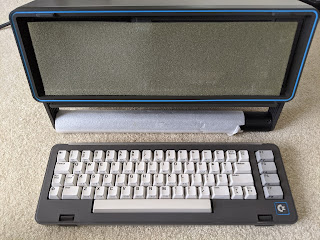 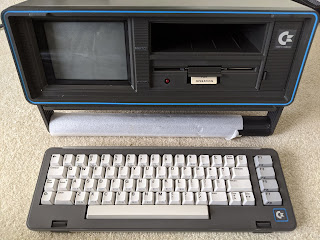 ... well, sort of. Degrading as polyethylene foam of this age often does, the foam had also left a little "extra" but it was easily wiped off. 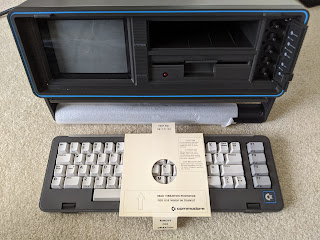 With the disk drive and monitor control door open. The 1541 disk drive still had the original head protector, which is a cardboard insert to prevent the disk heads from clattering themselves to death during transport. Please, if you're shipping a 5.25" drive, put a head protector in. A throwaway floppy disk will do nicely. 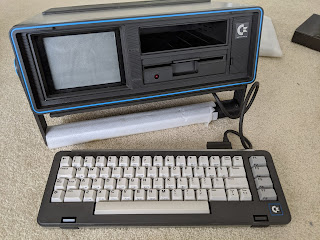 And finally, all plugged in and ready to rock, we now experience the last and most bittersweet Christmas emotion: disappointment. This unit does not power on. After some cursory checks of the fuse, it appears to be the power supply, which while more reliable than the obnoxious C64 potted epoxy brick is still subject to the capricious ravages of time. This unit will thus become a spare.

(The unboxing experience isn't exactly contemporary Apple, but I think I still would have been excited.)

Posted by ClassicHasClass at 1:43 AM