Only a few people remember there was once a native Lynx port to the classic Mac OS, circa 1997. A text-based browser on a GUI-only computer would seem contradictory, and certainly wasn't congruent with the HIG, but it was an honest-to-goodness Lynx 2.7 in a terminal-like window and it worked. It also has very low system demands (basically "just" System 7), making it one of the few web browsers you could even run on a Mac Plus. I used it quite a bit on a Mac IIsi, which was the first Mac I ever owned and for awhile the only web browser that machine ever ran.

Dusting it off as a test case for a secondary project, I discovered it has a problem which was not apparent during the days I used to use it: it inappropriately sends a Content-Encoding header that says it can accept gzip, but (possibly a MacLynx-specific bug) it is unable to decompress and view any pages sent accordingly. Back in the day not many servers supported that, so no one really noticed. Today everybody seems to. As a stopgap I figured the easiest way to fix it was simply to make that header incomprehensible and thus the server would ignore it, so I monkeypatched the binary directly to munge the gzip string it sends (the data fork for the PowerPC version and inside the DATA resource for the 68000 version). Ta-daa: 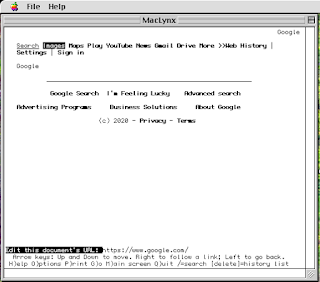 Now, credit where credit is due: it looks like Matej Horvat discovered this issue independently about a half-decade before this post. His solution was a bit better: he munged the Content-Encoding string itself rather than its value. This is not quite so straightforward in the 68000 version because of how strings are encoded in the DATA resource, but as a belt-and-suspenders approach I went ahead and implemented his approach too (after all, I suppose it's possible my munged string may match an encoding method that could be supported in the future).

Olivier's old site has not been up for years, so I resurrected it from a local copy and MacLynx is again hosted this time on Floodgap. Unfortunately I don't have his old French localization, but I do have the source code also (for CodeWarrior Pro 2), and you can download this unofficial "beta 2" from there as well. Both the 68K and PowerPC versions have both patches.

Sharp-eyed readers will have noted something a little odd about the screenshot. The secondary project works, but needs some polish and a couple minor bug fixes. More later.

Posted by ClassicHasClass at 10:30 PM