Not a refurb weekend: Apple IIgs 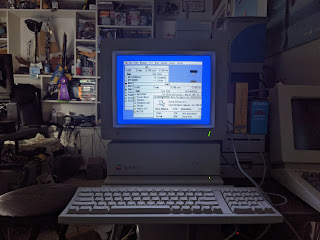 The most advanced Apple II computer was, of course, the one Apple insisted would be a dead end: the 1986-1992 Apple IIGS. And the reason was simply that the GS was too good a computer, offering Apple II compatibility, 16-bit performance, a 4096-colour palette with up to 640x200 high resolution graphics, and one of the best sound chips since the SID in the Commodore 64 (in fact, Bob Yannes designed the SID, then went on to found Ensoniq who produced the GS'). It was so good, in fact, that it posed a real risk during its development of cannibalizing sales from the Macintosh. Apple thus made sure it couldn't be a threat by deliberately hobbling the 16-bit 65816 CPU to just 2.8MHz when it was capable of up to 14MHz and at minimal additional cost, and intentionally never did more with the system publicly other than token ROM upgrades and pathetic bumps in memory. It takes some truly inspired buttheadery to hold back a fabulous system in that fashion, but that's what Apple was capable of in those days, and arguably still is.

This particular computer in my collection — and yes, that's a Canon Cat next to it, a topic for another day — is a Frankenstein assembled from three partially working units. It has a ROM 03 motherboard (the last revision not counting the 8MHz "Mark Twain" prototype) but with a Woz Limited Edition topcase just 'cuz, a 1MB Apple RAM expansion card (for 2.125MB of memory), an original 7MHz Applied Engineering TransWarp GS CPU accelerator with the 8K cache daughtercard, and a 20MB Applied Ingenuity InnerDrive consisting of a SCSI card plus a unified drive enclosure and replacement power supply. It is connected to an ADB keyboard and mouse, a LocalTalk network box, an AppleColor RGB display, an Apple joystick and 3.5" and 5.25" floppy drives, and boots into GS/OS 6.0.1.

A few months ago after I got LocalTalk up and running and was transferring some other things to it, it started to get flaky, and would invariably crash into the Apple machine language monitor after sitting at the GS/OS Finder for a few minutes. This machine was certainly produced in the "crap caps" era and bad capacitors are in the differential diagnosis, but with so many things installed a more systematic approach would be required. Today it's the Thanksgiving long weekend during a pandemic, and I've got only dayjob work and take-out dinners to look forward to for the next several days. Sounds like an opportunity for another ... Refurb Weekend!

First, let's pop the hood and check for obvious damage. I blew out some dust with an air can, but everything looked pretty shipshape otherwise. 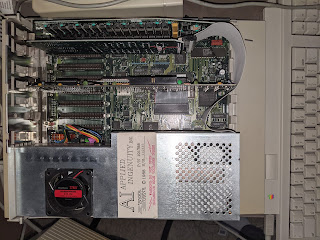 Looking overhead you can see the combination drive cage-power supply for the AI InnerDrive plus its ribbon cable to the controller card. Between the controller card and the enclosure is the TransWarp GS, and the Apple RAM expander card is furthest away. 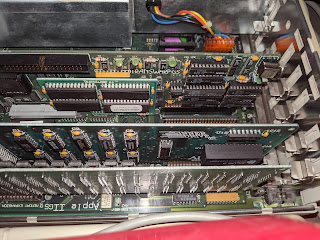 Closeups of the InnerDrive and TransWarp GS cards. 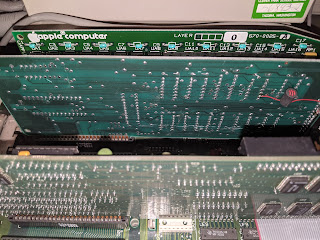 To check for board damage, you also need to remove the power supply, since a couple large capacitors sit under it and, inconveniently with the larger size of the AI combo cage and PSU, the PRAM battery. 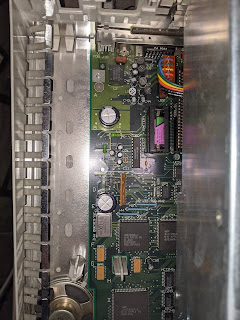 Clean as a whistle. I even got out the multimeter and checked the PRAM battery, and it still reads a full 3.65V.

I'm not a fan of prophylactically replacing capacitors that are not obviously bad, especially since you have a non-zero chance of accidentally breaking something in the process of fixing what ain't broke to begin with. At this point I resigned myself to having to test components independently: remove or disconnect something, fire it up and see if it crashes. I was strongly suspecting either the TransWarp card or the RAM expander, since those would certainly cause random failures. For that matter, it might even be heat related. Anyway, to get a baseline, I went ahead and disconnected the LocalTalk network, the joystick and the external drives, rebooted it and waited for it to crash.

After an hour it was still cheerfully sitting at the Finder. I fired up a game of Crystal Quest GS (ported by Becky Heinemann, who also wrote the firmware for the InnerDrive and had very nice things to say about TenFourFox). No crash. I fired up Wolfenstein 3D (ported by Logicware, which Heinemann co-founded). No crash. I played some Tunnels of Armageddon, one of my favourite GS games (no known connection to Heinemann). Still no crash.

I reconnected the joystick and let it sit for a few minutes. The joystick doesn't work too good, but it didn't make anything crash.

I reconnected the disk drives (best done with the power off, just in case) and let it sit some more. The machine had gotten good and warm with all this burning-in, so if heat was a factor, it should have been by then. No crash.

I reconnected the LocalTalk box and let it sit a couple more minutes. Boom, straight into the monitor while it was sitting idle.

I powered it off, disconnected the LocalTalk box, rebooted and let it sit a couple more minutes. No boom, no monitor, normal operation. The LocalTalk network was crashing GS/OS. And, actually, this makes sense, because the last thing I was doing with it before it got "wacky" was copying stuff from the network. It had never been connected to the house LocalTalk segment before because it never needed to be.

So what's crashing it, and why doesn't it do so right away? My guess is that the delay is because something on my household AppleTalk network transmits a packet intermittently that GS/OS's stack doesn't like. The segment itself couldn't be the cause because there were no other LocalTalk hosts up (the 486 and the Colour Classic are both connected to the segment, but neither were on). A Dayna EtherPrint-T bridges the LocalTalk segment to the main Ethernet via EtherTalk; on the other end of the Dayna is the little Macintosh IIci running old Netatalk which services old hosts, this Raptor Talos II running modern Netatalk which doesn't, and the G4 Sawtooth file server running Tiger (not Netatalk). Any one of those could be sending packets that GS/OS 6.0.1 just doesn't know how to cope with, but a cursory Google search and a look through comp.sys.apple2 didn't come up with anything similar. A mystery to be further investigated in a later entry.

In any event, it's good to see it doesn't appear to be caps nor hardware, and there are other ways to get files to the GS, so not having LocalTalk isn't the end of the world. Turns out this wasn't a Refurb Weekend after all, but who's complaining? That said, however, now that it's back in its right mind there are some future upgrades to do. The first is to consider some other means of mass storage since even old battleaxe SCSI drives don't last forever, and the InnerDrive firmware is notorious for only being able to work with a very small number of specific drive geometries (forget using a drive much later or larger than the 20MB one it has). A Compact Flash card solution exists and would seem the obvious choice rather than faffing around with another SCSI controller. The second is to put the full 8MB of RAM in it; there are some third party cards still made by homebrewers that will do this. If nothing else, between the two of them I'll be able to shoot a whole lot more Nazis for a whole lot longer, and that's always a(n Apple II) plus.

Posted by ClassicHasClass at 5:59 PM