Those mysterious Toshiba T-chips (plus: VTech madness with the Laser 50 and Type-right) 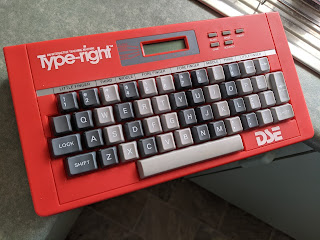 One of my wife's favourite possessions from childhood is an Australian Dick Smith Electronics (she's an Aussie, I'm a half-breed) Type-right. Much like Tandy Radio Shack in the United States, Dick Smith would happily rebadge anything he didn't have to engineer or build from scratch, and a number of his early computers were actually rebadges from Hong Kong company VTech. For example, the 6502-based VTech Creativision was sold in Dick Smith stores as the Wizzard [sic], and several of their Laser computers (notably the Z80-based 200, 210 and 310) were sold as the VZ line.

It won't come as a surprise to learn that this one is a rebadge too: 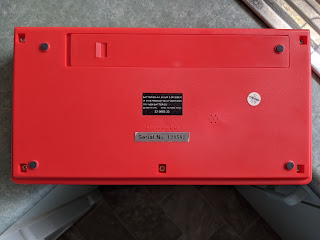 Yes, it's another VTech unit. In the United States it was sold (as the VTech Type-right) with an instruction manual and a tutorial cassette, but my wife only remembers it coming with a spiral-bound manual she is no longer able to find. Let's power it on. 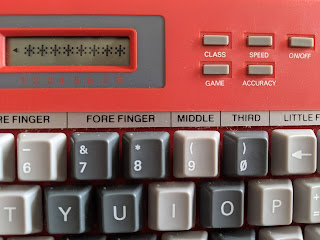 The display is a simple 8-character LCD. (Cheap is the name of the game here. More on that in a moment.) We can select lessons "CLASS" or a "GAME," which simply shows a queue of letters you have to clear from the screen by typing. She liked it, and it was kinda fun, in a Typing Tutor III Letter Invaders kind of way. The class mode, however, offers multiple lessons: 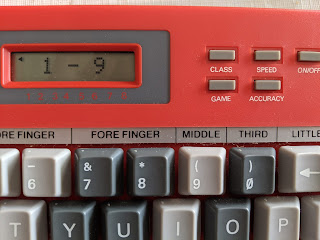 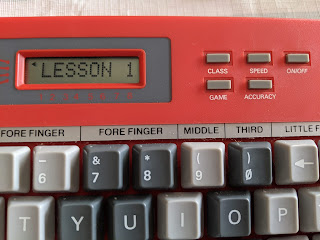 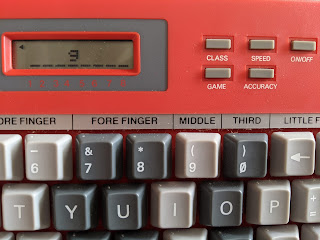 Yeah, okay, you want to see the hardware, too. This is where my wife turned a little paler than usual when I went after it with a screwdriver. Don't worry, it still works!

Another thing you won't be surprised by: there's not much inside. It's pretty much mostly keyboard. 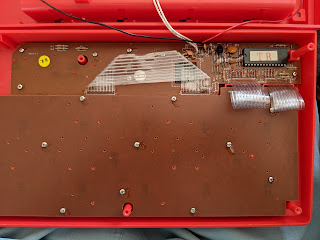 These cheap circuit boards are typical of the time. Everything in sight is covered in belched-up strands of epoxy. Although the sticker on the underside of the case has a 1985 copyright date, the actual board seems to have a manufacture date of "20 JAN 1988" with a yellow sticker "U.K." (Hong Kong was of course still a British territory then, but who knows what the sticker actually means). 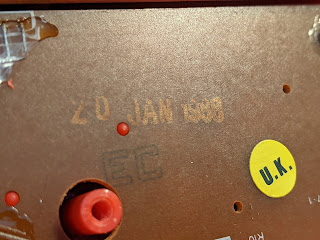 There is a chip visible, but if we peel back the "T R" sticker, 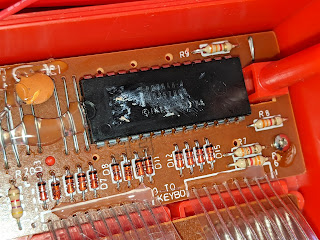 If we look back at the boards, we see a dotted area outline with the legend "U1" under that folded length of stiff ribbon cable. Time to pull out more screws and turn the board over. 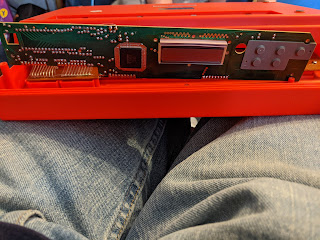 There is one big chip here in that position. Close up, 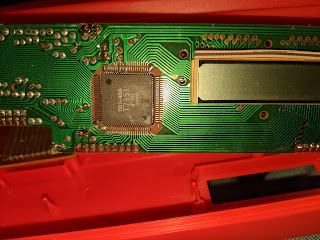 it's a surface mount Toshiba chip labeled T7951. What is this thing? Clearly it controls just about everything on the board!

The first clue comes from another VTech computer called the Laser 50, though not one that Dick Smith Electronics is known to have rebadged, which was sold in several countries including the United States. It resembles a Casio Pocket Computer and functions much the same way (even with the same P0 through P9 BASIC program spaces), but has a full keyboard and a carrying handle. Hmmmmm, does this form factor look familiar? 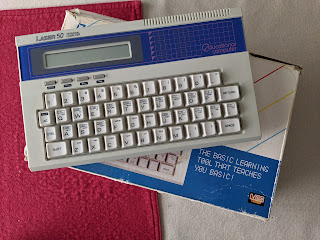 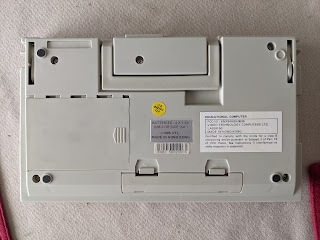 Cracked open to reveal, again, an obscenely cheap design. Besides the liberal application of epoxy, also notice the cardboard washers where the screws go in the left PCB to prevent them from shorting traces. There are card edges for a 16K memory expander and a cartridge/peripheral bus, but I've never seen them used, and I'm told they mated incredibly badly. External power (though it does do marvelously well on batteries) and cassette connectors are on the top. 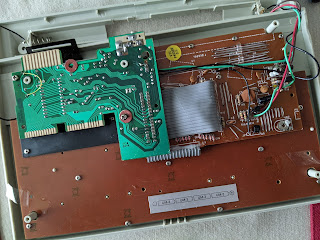 On the right board we again see silkscreened outlines labeled U1 and U2. This unit is non-functional and you can see they're definitely not meant to be repaired, so we're not going to make anything worse trying to get the board out. This turned out to be an unexpectedly difficult undertaking because the chips were literally stuck with (now degenerating) adhesive foam pads to the back of the LCD and it took a spudger to pry them off. They don't seem like they were there for cooling and in fact probably made things worse. I scraped off one so you can see. 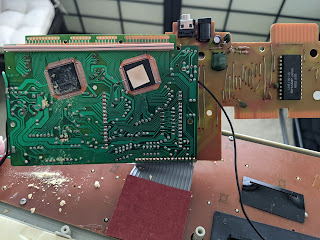 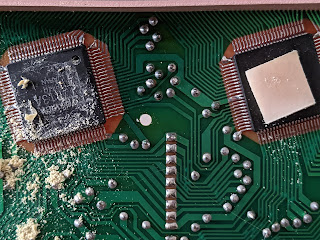 There is precedent for subsuming multiple functions into a single chip; it makes manufacture cheaper (and these things are all about cheap). Many of the small Pocket Computers used similar all-in-one chips that contained the CPU, LCD driver, I/O, mask ROM and RAM. Armed with this information, we can comfortably conjecture that there are two in the Laser 50 because it has a 16 character display, so they must each run one half, and the Type-right just has one because it only has eight characters. Likely the only difference between the T7812 and T7813 are the contents of the mask ROM.

That just leaves what the CPU is. The Laser 50 does not have any facility for directly writing machine code programs, and we can't get into its ROM/ROMs (though if I wanted to wreck my wife's precious toy and be doomed to sleep outside forever I might be able to get the ROM out of it), but there are other Toshiba T-chips serving as CPUs in other machines. The ones I could find after a few hours of Googling include:

By 1988, VTech seems to have abandoned the Toshiba T-chips and used a discrete and genuine Zilog Z80 in its PreComputer 1000. With this in mind, while we don't know what was in the T7826, all the other CPU-like T-chips I could find incorporate Z80s and VTech kept using the Z80 even after they stopped using T-chips, so these systems are probably Z80-based too.

Posted by ClassicHasClass at 9:10 PM