The Commodore Plus/4, 3-Plus-1 and computer literacy

I'm testing lots of units in storage, including a whole mess of Commodore 264-series machines, mostly C16s (in both the domestic U.S. and Mexican Sigma variants, which are exactly the same internally), but also a couple of Plus/4s. The Plus/4 was beaten up in the United States press as the "Minus/60" because of TED's deficiencies (more colours but no sprites and worse sound) and its intentional incompatibility with the Commodore 64's large software library. Indeed, that's probably why my family upgraded to the 128 instead and completely skipped it.

Another aspect of the +4 that was mercilessly derided was the 3-Plus-1 pack-in software. Based on an integrated suite called Trilogy by Pacific Tri-Micro, it included a word processor, database and spreadsheet; the fact they were intended to be basic applications did not prevent critical displeasure. Popular Computing Weekly pointed out how small the working space was and their limited features, and InfoWorld complained that "[t]he word processor is the worst I've ever seen," but The Transactor's editor Richard Evers was particularly barbed, famously observing that "[t]he word processor is barely that, the data base [sic] defiles the name and the spreadsheet has little spread." But while this quote got wide currency, the rest of the article is actually far more complimentary, adding, "Each package is well written, taking into consideration the limitation of trying to make them all work within the confines of each other. Running two packages in tandem is possible with this system ... think of the software as an almost free bonus, and accept its limitations."

I certainly thought so. While I didn't pick up my first +4 until I was a starving medical student, it was a cheap thrift store purchase and I made good use of the spreadsheet as a household budget. The word processor was just good enough for letters (school papers I typed in Pocket Writer on the 128D, until I got a Macintosh IIsi) and I barely used the database at all, but the spreadsheet actually worked fairly well for basic figures. Best of all, it loaded instantly because everything was in ROM, and you really could switch back and forth from one to the other and exchange data without losing anything, neither of which was true of the programs I had on the 128. In some respects it was even more "integrated" than bigger integrated packages (think Lotus Symphony, etc.) on the PCs of the time. It is debatable how useful this feature would have been versus simply having the applications run one at a time for a larger workspace, but it did work.

Something else that worked was this Plus/4 that I dredged out of storage to test. While checking the contents, I found it had this letter in the box which I don't even remember noticing before: 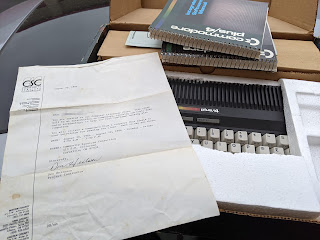 The previous owner, in August 1986 (granted about a year and change after the +4 had flamed out), was invited to a computer literacy class, "an introduction to computers, teaching you basic data entry terminology, to help you feel confident working with computers. You will recieve [sic] a Commodore Plus 4 [sic] computer that adapts to your television for passing the class." The class was administered in Oregon.

There is no mention of any peripherals being included, and no Commodore could directly connect to a standard cassette deck for storage. Furthermore, it is likely the Plus/4 was selected solely because they got donated stock that didn't sell. Still, here was a computer that was cheap enough to just give somebody and connect up to their television. You pressed a key and almost instantaneously you got a word processor, a spreadsheet and a database that came built-in. You could type letters, do a household budget and maintain an address book. If you picked up a 1541 disk drive, which by then was selling for under $200, you could save files. If you picked up any of the cheap Commodore 1525-compatible printers on the market, you could print letters. If you cared to crack out the manual, you could learn to write your own programs.

For this person in western Oregon, this Plus/4, as idiosyncratic and artificially limited as it was, may have been their gateway to computer literacy — and at that time it very likely was all the computer they actually needed.

Posted by ClassicHasClass at 4:25 PM

Email ThisBlogThis!Share to TwitterShare to FacebookShare to Pinterest
Labels: 6502, c264