I can't say I'm surprised to hear that Fry's Electronics is closing their doors. Back in the distant pre-pandemic year of 2019, I went to a Fry's in Fremont to pick up some replacement parts since it was on the way. The store was dead. Dead, dead, dead. I counted more staff than customers and I figured that store was ripe for closure; now that everyone is ordering everything online, and particularly their tech-savvy customer base, it was inevitable that COVID-19 would kill them too. The stores were too big and had too much stuff that people only needed intermittently.

But I do have very fond memories of Fry's. I grew up in San Diego, and they took over the Incredible Universe location off Murphy Canyon Road when Tandy got rid of the brand in the 1990s. I bought a lot of classic Mac peripherals and upgrades there, many of which I still have, including hard disks, processor cards and 3D accelerators. If I needed a SCSI cable or a modular jack or some wacky board, they probably had it. I also spent a lot of time in their CD section; for the last few years they were blowing them out at $5 a pop, which was great, since I'm apparently the last person in America to actually buy discs. They also had 3D Blu-rays and were one of the few stores to keep carrying them in any quantity even after the major film studios largely stopped producing them domestically. And of course who can forget the long junk food aisle of temptation we all had to walk along to check out?

My other favourite Fry's include Roseville, CA, with the locomotive sculpture bashing through the front (probably my favourite store display). Here's a couple from there in 2018: 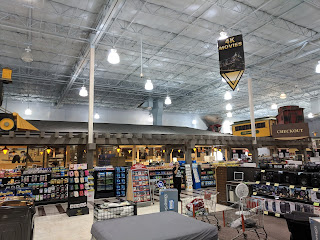 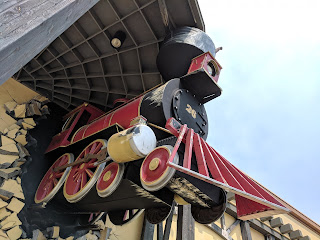 Also North Sacramento, CA, ended up there a lot when I was still regularly going to Sacramento on official business; Sunnyvale, mostly because of pleasant memories going to Halted Electronics down the street which also closed, of course; and Las Vegas, with the big slot machine. I also remember the Fry's in Anaheim with the space shuttle and my wife's new favourite book: 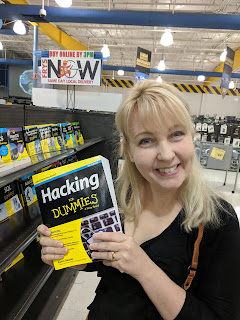 but all I have of the San Diego store was this blurry picture I took of their lock screen showing everlasting disdain for the competition, 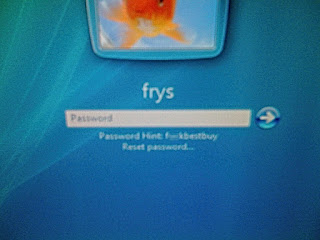 I don't think any of these are likely to remain retail stores. In the future post-pandemic days, this sort of boutique electronic sales will entirely be ruled by Pacific Rim dropshippers sending directly from Guangzhou, and it'll be the same stuff for less. But I'll miss the experience, though. Kids in a candy store never had it so good.

Posted by ClassicHasClass at 9:48 AM

Email ThisBlogThis!Share to TwitterShare to FacebookShare to Pinterest
Labels: memorials