The quest for Wolfenstein 3D music on the Apple IIgs 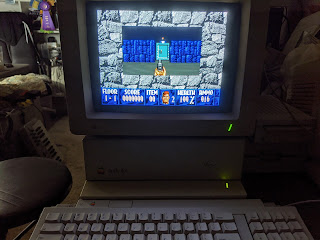 Many people are unaware there is a port of Wolfenstein 3D to the Apple IIgs (my GS is currently still in working order). It's actually a surprisingly good one, derived in part from the Macintosh port with a custom soundtrack, with a strange history of its own. It plays well enough on my 8MHz TransWarp GS accelerator with the viewport about half size, but you really need a ripping soundtrack to mow down Nazis, and while I could revel in their screams the game never once played a note of music.

Naturally, because coronavirus, I decided to spend a weekend rectifying this. And yes, it's the latest 1.1 version, yes, the checkbox for Music was checked in the Wolf3D preferences (Command-P), and yes, other sound effects worked fine.

I like to think I have a modestly tricked out system (hard disk, GS/OS 6.0.1, accelerator, ROM 03 with a Woz Special Edition topcase) but one thing it was a little weak on was RAM. A ROM 03 IIgs has 1.125MB on board (1MB, plus 128K); I had a fully populated 1MB Apple RAM expansion card in, so I had 2.125MB total. Officially the game doesn't play on anything less than 4MB, but it clearly ran, so I figured RAM was the immediate problem.

There are many choices for RAM upgrades for the IIgs but one with a long history (albeit differing opinions) is the GGLabs RAMGS/8. This gave me 8320K (8MB plus 128K on board), the price wasn't exorbitant and I could nab one easily on eBay. Compared to the other cards in my system, it's rather diminutive (and doesn't need the strut prop the long Apple RAM card did). 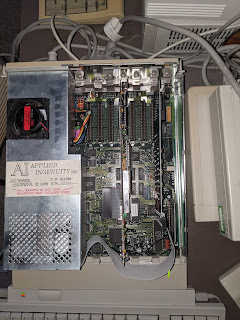 Its sole installation direction is a silkscreened arrow saying "FRONT." This is a little nerve-wracking because the slot has no keys and the card could go in it either way, and the installation appears backwards. But that's how it's supposed to fit (the controller board for the InnerSpace hard disk is behind it): 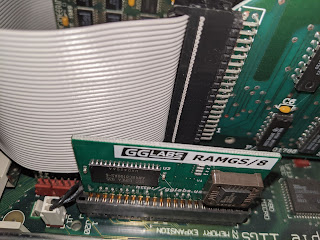 With that, I started up GS/OS, admired the nice ample addressing space in Get Info in the Finder, and ran the memory test provided with AppleWorks GS. After many minutes I got a clean bill of health. 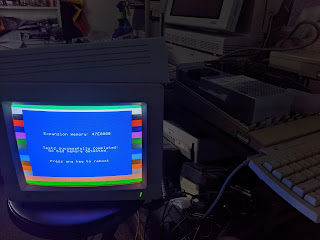 However, I still got no music out of Wolfenstein 3D. Trashing the prefs file made no difference. So what else was I doing wrong?

The classic Mac OS divides components up into control panels and extensions primarily but GS/OS deals in control panels and tools. On a ROM 03 system, about half of these tools are built into the ROM and the rest reside on disk. I had a vanilla GS/OS install with all Tools through 034, but music support needs Tool035, which is not installed with standard GS/OS.

After some digging I found the Tool as a standalone file on an unrelated disk image, but this disk image was in the newer-fangled .2mg format, which I can't directly turn into a floppy with DiskCopy or DiskDup on my Power Mac 7300. (Yes, you can use things like ADTPro to write the disk on the IIgs itself, but this Mac has a suitable floppy drive, and it seems like I should be able to use it rather than messing around with serial cables.) CiderPress will convert these, however, and while the GUI is Windows-only you can build some pieces of it on Linux. None of them would directly do what I wanted, which is to turn it into a DiskCopy image, but the source code gets you most of the way there. Edit Convert.cpp and find the line switch(18). This is the destination format. Since I knew this was an 800K image, I changed the 18 to 14, which specifies a DiskCopy 4.2 image, and used the badly-named iconv (not to be confused with libiconv) to generate the image. On the Power Mac 7300 I changed the type and creator codes in ResEdit to dImg and dCpy respectively so that DiskDup would accept it. Bang, a 3.5" floppy with the needed tool.

Triumphantly I returned to the IIgs, inserted the disk, copied the Tool over, restarted GS/OS, started Wolfenstein 3D, and indeed heard some very impressive music out of the wavetable synthesizer. Success! Unfortunately this is where I think I pushed my luck: the 8MHz TransWarp GS just can't keep up with music and the rendering. In fact, while it tries to load the game data you can intermittently hear the music grind to a halt (it even crashed out to the monitor once, presumably because the data didn't arrive quick enough), and you have to have the viewport at postage stamp size to make it playable. I'm glad I have 8MB of RAM and it works very well in everything else, but after all that I decided to turn music back off so I could actually play the game (but I kept the Tool, in case other games require it).

So, with the RAM situation licked, I guess now I'm in the market for a faster IIgs accelerator. In today's world, a man's gotta kill Nazis with a soundtrack, you know.

Posted by ClassicHasClass at 5:17 PM